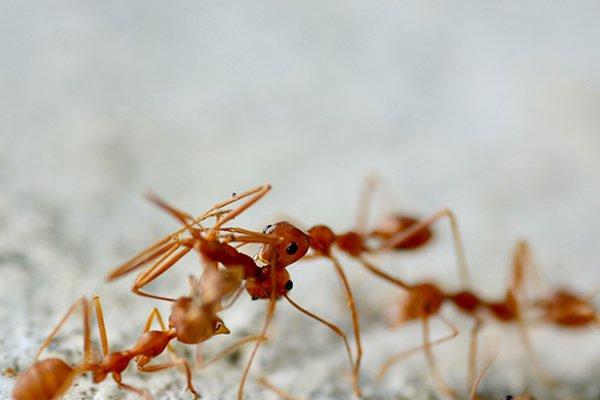 If you think that ants are nonaggressive pests, then you’re mostly right. Ants generally don't bite people or cause health problems. However, if there’s one ant species in Houston that doesn’t fit the mold, it’s fire ants. Fire ants pose an increasing concern for Houston property owners when they crowd out other insects and bite Houston residents. Before these pernicious pests come around to your household, let’s discuss what you need to know for effective fire ant control.

Fire ants share many characteristics with other ant species. A fire ant’s body has three segments: a round head, a smaller thorax (midsection), and a larger abdomen (end section). Each segment has two legs; additionally, the fire ant’s head has two antennae, a pair of pincers, and the abdomen has a stinger at the end.

Fire ants can grow to anywhere between 2-6 mm in length and are most distinguishable by their bright, reddish-brown bodies. These fiery pests are aggressive compared to most ants, stinging any organism that gets too close to the colony. Fire ants also push other insect colonies away, making them an invasive species that can cause ecological damage over time. Overall, fire ants are dangerous pests to have on your property. But how dangerous can they be?

Why Fire Ants Are Dangerous

A fire ant’s sting is painful. These pests can leave bright, painful welts that last a week or longer, and since fire ants swarm and sting repeatedly, you aren't likely to forget an encounter with these troublesome creatures.

The reason fire ant stings are so painful is that their stingers are venomous. This venom primarily incapacitates the insects that get too close to the ant nest and usually doesn’t have an adverse effect on humans. However, a portion of the population is allergic to fire ant stings. About 1% of all fire ant victims develop some form of anaphylactic shock, which is a full-body allergic reaction. These people can develop:

At its worst, a fire ant sting can cause low blood pressure, fainting, and breathing difficulty, prompting a medical response. If you haven’t been bitten by a fire ant, you don’t want to find out if you’re allergic. Even people who don’t have an allergy to the sting can develop one, over time. Since fire ants attack aggressively and repeatedly, their presence on your Houston property should be dealt with promptly.

Why Fire Ants Are Hard To Get Rid Of

Houston residents who have had a fire ant problem already know this: fire ants are hard to get rid of. When you try to remove a colony, these pests are quick to create another one. Often, destroying one colony makes these pests create two or three more, making them the “hydra’s head” of infestations.

Fire ants have to be killed off entirely. Since this is hard to do and poses a risk to your health, Houston residents shouldn’t try to get rid of fire ants on their own. Rather, contacting the pest professionals at Modern Pest Control is the best solution to an ant infestation. With our state-of-the-art equipment and years of expertise, we won’t let any pests trouble your family – not even fire ants.